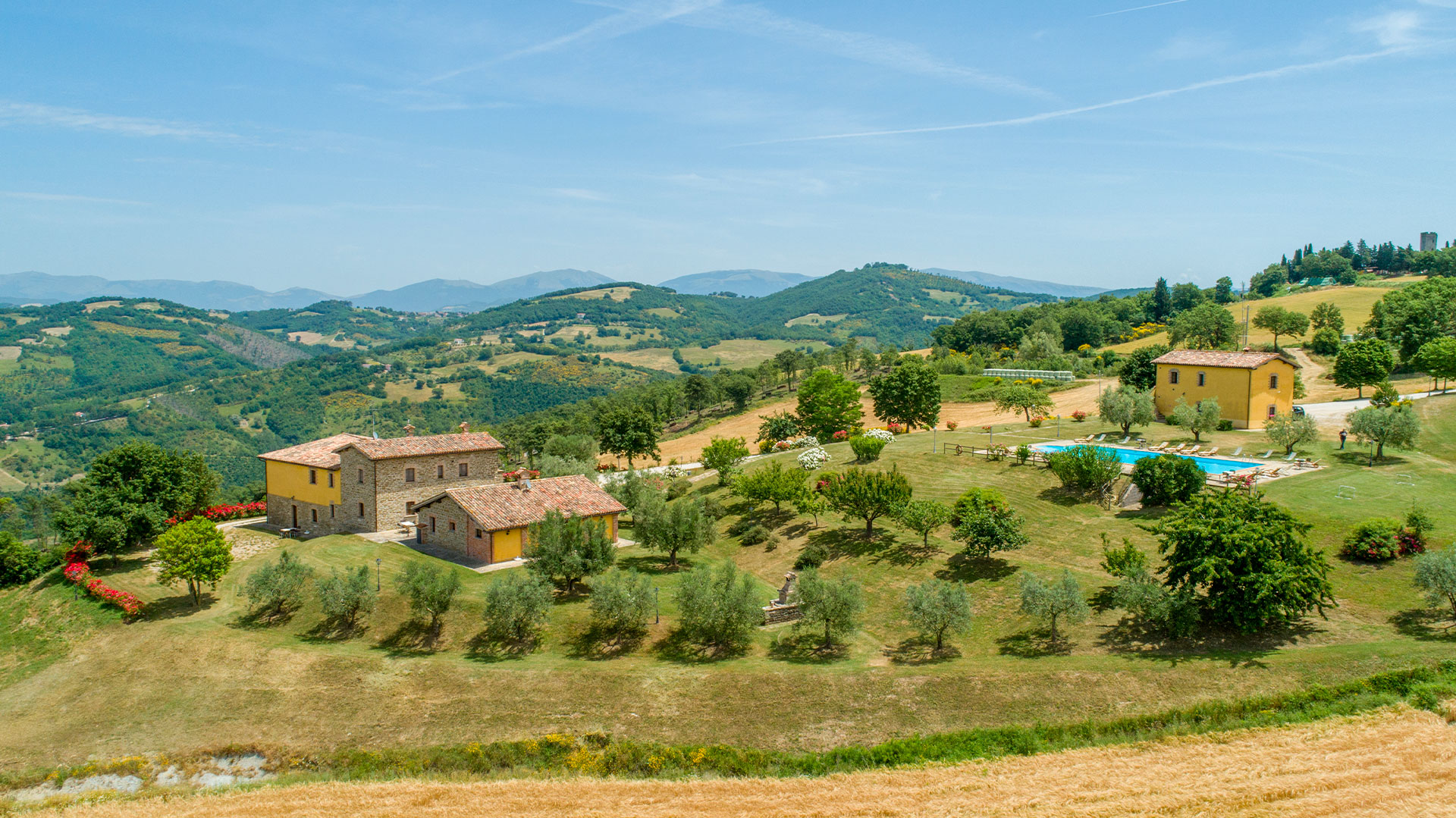 Among the major cities nearby we find Gubbio, Città di castello , Perugia, Assisi and Foligno, each of them dotted with numerous characteristic villages that echo the past centuries, with their corners of art and history.

Among the most beautiful and characteristic cities of Umbria, Gubbio offers its visitors a series of beautiful places to discover, starting from the Duomo, inside which it is possible to admire wonderful works by Gubbio artists of the sixteenth century. Opposite the Duomo instead we find the Ducal Palace, dating back to the second half of the fifteenth century, built by Duke Federico di Montefeltro.

Piazza Grande, with its symbolic Palazzo dei Consoli with an imposing Gothic style, offers a panoramic view of the Eugubine territory of unique beauty.

Inside the Palazzo dei Consoli, the municipal museum houses the 7 “Eugubine Tables”, the most important document for the history of the Italic peoples, dated between the III and the 2nd century BC

Outside the ancient city walls you can admire the Roman Theater, which during the summer hosts numerous classical shows, dating back to the 1st century BC later restored between 1800 and 1900

Speaking of the “city of the mad” not everyone knows that it is possible to win the “driving license of the mad” and the “Eugubian citizenship” by turning 3 times around the small fountain present in Largo Bargello.

On the top of Monte Igino, reachable by cable car, it is possible to visit the Basilica of Sant’Ubaldo which houses the remains of the saint and the famous candles.

Assisi, famous above all for being the birthplace of San Francesco and Santa Chiara, attracts thousands of tourists every year thanks to its archaeological and historical artistic heritage.

UNESCO World Heritage Site is the Basilica of San Francesco, a true architectural masterpiece, treasure of Italian sacred art. In the Basilica you will be enchanted in front of the most famous frescoes in the world signed by Giotto which narrates the life of the saint as well as other frescoes by the masters of the ‘200 and’ 300 in particular by Cimabue and Jacopo Torriti, the stories of San Francesco painted by Simone Martini and the stories of the passion of Christ painted by Pietro Lorenzetti.

From the Basilica, the visitor along the streets of Assisi can arrive at the Piazza del Comune where the Temple of Minerva, the Torre del Popolo, the Palazzo del Capitano del Popolo and Palazzo dei Priori.

The next stop is the Gothic-style Basilica of Santa Chiara where you will find the relics of the Saint and the Crucifix who spoke to Saint Francis.

The walk through the narrow alleys and climbs impervious of the historic center make you savor re the true essence of Assisi and its spiritual and fascinating atmospheres.

Visitors to Assisi cannot forget to visit the Basilica of Santa Maria degli Angeli, considered the seventh largest Christian church in the world. It is located 4 km from Assisi and the Porziuncola is incorporated inside it, where St. Francis often gathered in prayer, next to the Basilica there is finally the Cappella del Transito, where St. Francis died.

Perugia is famous for 3 things, Umbria Jazz, Eurochocolate and Perugino’s paintings. The Umbrian capital, however, has much more to offer to tourists and to the most curious and open travelers.

In addition to the events not to be missed during the year, the Chocolate Festival in Autumn and in Summer you can breathe the vibrant atmosphere of Umbria Jazz.

Perugia is also home to illustrious painters such as Perugino and Pinturicchio and over the centuries has welcomed literary artists and saints.

Of course Perugia is appreciable also for its extraordinary monuments and past must-see. Among the monuments we can mention the Cathedral of San Lorenzo with the Hat of the Holy Ring inside and the bronze statue of Julius II on the outside and the portico of the Loggia del Braccio.

The Visitor in Perugia does not can do without taking a photo of the Fontana Maggiore, symbol of the city and one of the finest examples of medieval fountain in Italy.

A walk in the alleys of the historic center is worth while looking for Etruscan walls , the well and the Etruscan arch, you will be able to enjoy more typically Umbrian views of the city with brick houses and flowered balconies.

In Perugia, the National Gallery of Umbria exhibits masterpieces of art. ranging from the thirteenth to the nineteenth century, but also works of the 1400s signed Piero della Francesca, Beato Angelico, Pinturicchio, Perugino and Duccio di Buoninsegna.

Immersed in the green Umbrian hills, Lake Trasimeno is the fourth largest lake in Italy. On its banks there are villages of breathtaking beauty such as Castiglione del Lago, Passignano sul Trasimeno, San Feliciano, Tuoro sul Trasimeno, Castel Rigone, but the villages located further inland such as the Etruscan Panicale, Lisciano Niccone and Piegaro.

The visitor can choose to start the tour by ferry to the islands: Isola Maggiore, Isola Minore and Isola Polvese. The largest is the island of Polvese, which can be freely visited and offers visitors some ruins of the Olivetana Church of S. Secondo, the church of S. Giuliano and the Rocca.

The only inhabited island is Isola Maggiore, here the things to see are different, starting from the main square and going up the streets of the island you will meet the windmill, the church of San Salvatore, the ruins of the monastery of the Sisters of San Leonardo, the Rock of San Francesco and so on … because few know it but the major island was one of the places dear to St. Francis of Assisi who stopped and meditated there during Lent of 1211. The minor island is private and not open to visitors.

After the islands we advise you to walk the perimeter of Lake Trasimeno to discover its views: Castiglione del Lago and Passignano, are two enchanting towns. For bike lovers there are interesting itineraries to visit the lake.

On the other hand, for the most refined palates around Lake Trasimeno you can find a wide choice of restaurants with many specialties that almost all see lake fish as protagonists !

Today Spello is a town of 8,600 inhabitants and is considered one of the most beautiful villages in Italy.
The lower part still partially preserves the Roman Walls which boast three doors, which are the Porta Urbica su Ma Rome, the Porta Consolare on Piazza del Mercato and finally Porta Venere, decorated with two imposing towers, known as Torri di Properzio.
The Roman church is an unmissable place to visit during the Roman house of the 1st century AD in Spellonella. hidden until 1885 and then brought to light thanks to excavations carried out under the Town Hall, at the time an elegant villa. The series of Roman vestiges are completed by the remains of the amphitheater and the arch of Augustus.

Another place to see is Villa Costanzi, also known as Villa Fidelia, structured in terraces according to the will of the Urbani which hosts ad today cultural events and concert performances set in the beautiful season in the wonderful internal park, where a building is flanked where exhibitions on internationally renowned artists such as Guttuso, Tamburi, Ligabue and Tiziano are regularly held, for those interested.
Palazzo dei Canonici is the ideal destination for art lovers at 360 degrees, where there are the Civic Museum and the Pinacoteca, crucibles of entrancing works including a Madonna enthroned with the Child), the great triptych of the Master of the Assumption of Amelia and the fourteenth-century processional cross by Paolo Vanni, without neglecting the table of the crucified Christ by Niccolò Alunno and Pietro di Mazzaforte.

In addition you can contemplate precious pieces of goldsmith suti, sacred objects and the urn of San Felice, dating back to the 18th century.

Worth seeing are the Palazzo Comunale, Palazzo Cruciali and Palazzo Baglioni, three examples of architectural perfection.

To reach the heart of the city of Foligno, we recommend that you follow the path of the Topino river and head to Piazza della Repubblica, where you can admire an extraordinary architectural ensemble consisting of the Duomo, the Palazzo Comunale and Palazzo Trinci.

The Cathedral, dedicated to San Feliciano, patron saint of the city, is in the neoclassical-baroque style. Inside, the Diocesan Capitular Museum and the Crypt of San Feliciano are not to be missed.

Also in neoclassical style is the 13th century Town Hall. and flanked by the crenellated tower of the ‘400. Palazzo Trinci, seat of the Pinacoteca, overlooks the Duomo. Completed in 1407 and restored in 1949, it has a Neoclassical facade and a magnificent Gothic staircase.

Inside is the Council Room with vaults, the walls frescoed by Piervittori and a huge stone fireplace from the 16th century. Adjacent to the Palazzo is Palazzo Orfini, the ancient home of Emiliano Orfini, the typographer who printed the first edition of the Divine Comedy in Italian, with a beautiful portal from 1500.

Bavagna is a town that deserves a visit , as one of the most beautiful historical re-enactments of Umbria takes place here: the Mercato delle Gaite.

Inhabited since Roman times, the village of Montefalco as we know it today originated after 1249, the date on which it was practically razed to the ground by the troops of Frederick II and immediately rebuilt by the inhabitants. To these years we owe the definition of the typically medieval structure of the village, today considered one of the most beautiful in Umbria.
Arrived in Montefalco along the “Strada del Sagrantino” you cannot help but notice the infinite expanses of olive groves and vineyards, but also the spectacular panoramic view that can be enjoyed from the hill where the village stands: from the Montefalco viewpoints you can see Perugia and Assisi, but also Spello, Bevagna, Trevi, Foligno and Spoleto, while on the horizon the Subasio and the Martani Mountains.

Free parking is available just outside Porta San Francesco. Here begins the view path near the village of Montefalco.

Entering from Porta San Francesco and following the main road in a couple of minutes you will reach the church of San Francesco, built between 1335 and 1338 and today converted into a Civic Museum.

Inside there are a series of frescoes by Benozzo Gozzoli with the Stories of San Francesco, dated 1452, as well as a Nativity by Pietro Vannucci (called Perugino) and other notable frescoes of the Umbrian school dating back to the fifteenth century.
In the adjacent municipal art gallery, there are also works by Francesco Melanzio, Antoniazzo Romano, Niccolò Alunno, Melozzo da Forlì and other artists of the Umbrian school from the fourteenth to the eighteenth century. < br /> After the visit to the Civic Museum, the historic center of Montefalco is located a few meters away. The Town Hall, built in the 13th century, with an adjoining 15th-century loggia and a civic tower that can be visited, overlook the circular town square; the former church of San Filippo Neri, from the 18th century, now used as a city theater; the oratory of Santa Maria in Piazza (XIII century) and elegant noble palaces of the XVI century.

At our accommodation you can enjoy free WiFi connection, with excellent signal throughout the hotel, even by the pool! 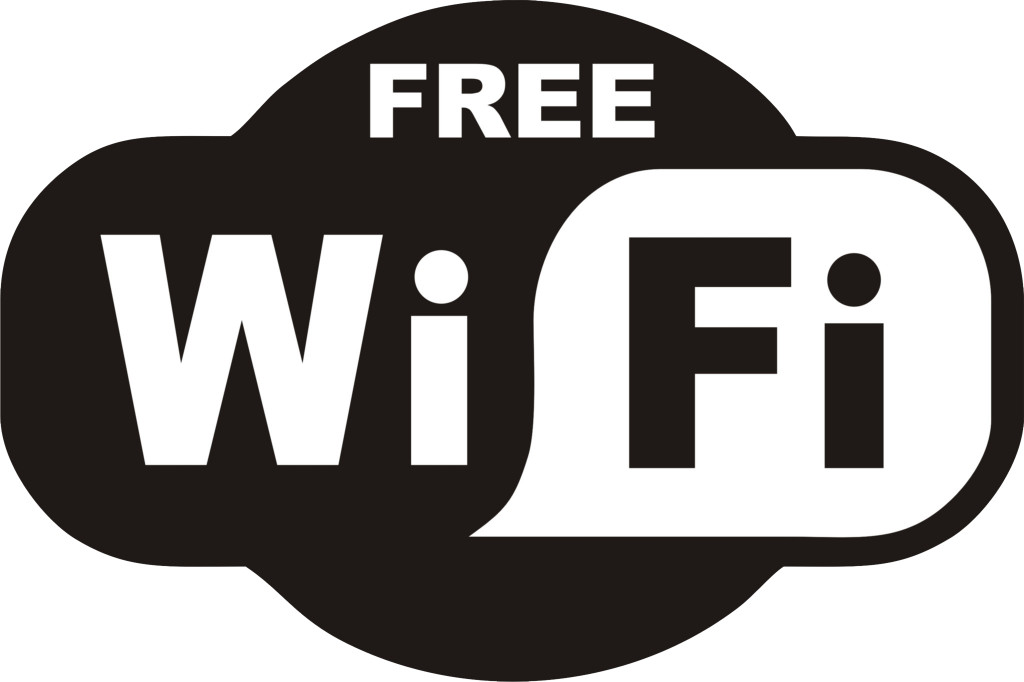